Today, Ruby on Rails is widely used, from small start-up companies to large innovative corporations, like Twitter and Groupon. Ruby on Rails has garnered a reputation for being a solid framework that takes advantage of a quick and responsive programming language. Check out these great statistics for the number and industries with websites designed using Ruby on Rails. This statistics were provided by Builtwith.com in 2013. 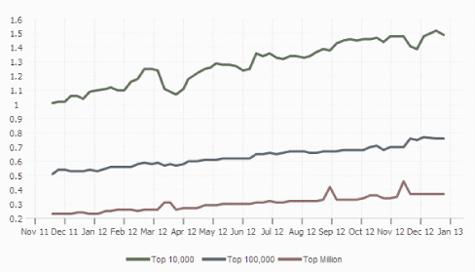 Ruby on Rails allows web developers and designers to create designs quickly and efficiently by sticking to the two main guiding principles of “don’t repeat yourself” and “convention over configuration”. The first principle, “don’t repeat yourself” or DRY literally helps developers avoid the need to write bits of programming language repeatedly. Programmers using the DRY principle with Ruby on Rails reportedly save time and increases efficiency.

The second guiding principle favors coding by convention or “convention over configuration”. That is, with Ruby on Rails, programmers can write the code in the simplest form and only need to specify for unusual parts of the code. Ruby on Rails also uses the model–view–controller pattern to organize. Model-view-controller (MVC) allows applications to be broken into the following three parts: model, view and controller. MVC allows programmers to easily view and edit applications. Finally, Ruby on Rails also generates ready made code or RubyGems, which can be used by programmers and developers to add directly to projects. All of these aspects contribute to the efficiency and cost effectiveness of Ruby on Rails.

In 2013 developers released Ruby on Rails 4.0 with new features and computer bug/glitch fixes. The 4.0 version of Rails generated excitement among programmers and developers, it reportedly allows for the fastest and most responsive programming to date. New applications like Turbolinks and Active Record add to the efficiency and value.
To learn more about Ruby on Rails, try “Agile Web Development with Rails 4: Facets of Ruby” (2013), Ruby, Thomas and Hansson. “The Ruby Programming Language” (2011) by David Flanagan and Yukihiro Matsumoto. Also, there is a vibrant Ruby on Rails community at the website where one can join the mailing list and read the blogs as well as a Twitter handle and even real-time chats.

Marketing Technologists create compelling content and align it with the technology that will maximize its reach. Request a custom proposal for your business.